For in-vitro diagnostics. The RIDASCREEN® Echinococcus IgG test is an enzyme immunoassay for the qualitative determination of IgG antibodies against Echinococcus granulosus und Echinococcus multilocularis in human serum. The test should be used for confirmation purposes when there is a suspected case of infection with Echinococcus.

The infection caused by E. granulosus is known as cystic hydatid disease (CHD) and manifests itself as cysts in various organs, especially the liver and lungs. These cysts may become quite large and contain hundreds or thousands of metacestodes. E. multilocularis infection is known as alveolar hydatid disease. The hydatides are much smaller and form an alveolar structure which spread cancerously throughout the infected tissue. Since no Echinococcus eggs are shed by infected humans, serological determinations are of great importance in the diagnosis of hydatid disease. Due to a high cross reactivity, a species differentiation is not possible by means of antibodies in an ELISA. Therefore the source of antigen (granulosus or multilocularis) is not important for antibody detection. The degree of antibody response to the cyst is mediated by its location and degree of calcification. Normally, liver cysts produce a higher antibody response than lung cysts. Cross reactions have been described for antibodies against Taenia solium.

Purified antigens are bonded to a microwell plate. Antibodies which are present in the patient samples attach themselves to the antigens and are determined during the second phase of the test by using enzyme-labelled anti-human antibodies (the conjugate). The enzyme converts the colourless substrate (H2O2/TMB) to a blue end product. The enzyme reaction is stopped by adding sulphuric acid. The colour of the mixture then switches from blue to yellow. A final measurement is carried out in a photometer at 450 nm using a reference wavelength ≥ 620 nm. 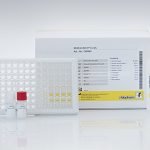 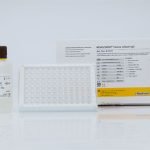