For in vitro diagnostic use. The RIDA®GENE SARS-CoV-2 test, which will be performed on the Roche LightCycler® 480II, is a multiplex real-time RT-PCR for the direct qualitative detection of coronavirus (SARS-CoV-2) RNA from human nasal/throat swabs of people with symptoms of a respiratory infection.
The RIDA®GENE SARS-CoV-2 test is designed to support the differential diagnosis of SARS-CoV-2 infections in patients with symptoms of respiratory infection in conjunction with other clinical and laboratory findings.
Negative results do not rule out infection with SARS-CoV-2 and should not be used as the sole basis for diagnosis.
The product is intended for use by professional users in hospital laboratories, reference laboratories, private laboratories or state laboratories.

Should you have to use other extraction procedures or real-time PCR instruments, please contact R-Biopharm AG to check the compatibility at mdx@r-biopharm.de.

At the end of December in the Chinese metropolis of Wuhan, numerous cases of pneumonia of unknown cause occurred. At the beginning of January, Chinese authorities identified a new type of corona virus (SARS-CoV-2) as the cause. The disease caused by SARS-CoV-2 is officially named COVID-19 („Corona Virus disease 2019“) and is transmissible from person to person.
Worldwide, 3,925,815 cases have been reported (as of May 10, 2020). The initial cases in Germany were confirmed at the end of January 2020. In Germany 169,575 cases have been reported (as of May 11, 2020). The WHO declared an international health emergency on January 31, 2020.
The original WHO guidelines recommended a three-target strategy. When this guideline was prepared, there was insufficient sequence information for SARS-CoV-2, so that the sequence ranges published by the WHO in the individual target gene regions were too non-specific for reliable detection of SARS-CoV-2 RNA. In order to increase the specificity of the tests for SARS-CoV-2, a three-target strategy was pursued accordingly. On 17 January 2020, this three-target strategy was reduced to a two-target strategy because the third target had insufficient sensitivity.
On 17 March 2020, the WHO issued interim guidance for the diagnosis of suspected cases of coronavirus disease (COVID-19), caused by SARS-CoV-2, with regard to the requirements for molecular biological laboratory tests, which states: “In areas where the COVID-19 virus is widely spread, a simpler algorithm might be adopted in which, for example, screening by real-time RT-PCR of a single discriminatory SARS-CoV-2 target (single-target strategy) is considered sufficient.”
In developing the RIDA®GENE SARS-CoV-2 real-time RT-PCR assay, R-Biopharm AG has followed the single-target strategy right from the start. Our goal was to establish sensitive and specific detection of SARS-CoV-2 with an optimised workflow, i.e. without any further necessary confirmation. This was possible even at this point in time because a large number of genome sequences of the novel coronavirus SARS-CoV-2 were available. In the course of genome analyses, we were able to identify a region within the E gene which is highly specific to SARS-CoV-2 and which has high sensitivity for screening purposes. This region is located about 200 base pairs downstream of the non-specific region of the E gene of SARS-CoV-2 published by the WHO. In detecting this specific E gene region, we were thus able to reduce the detection of SARS-CoV-2 RNA to only one target. 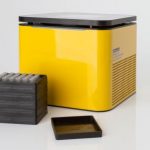 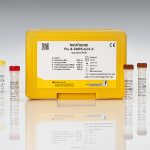