Respiratory diseases often show similar symptoms, but are triggered by a variety of pathogens, such as viruses, bacteria and fungi. Rapid, comprehensive and reliable diagnostics as a basis for targeted therapy are therefore essential to quickly alleviate symptoms, prevent the spread of highly infectious germs and avoid unnecessary antibiotic administration. In this context, PCR is considered an integral part of routine diagnostics for the detection and differentiation of respiratory pathogens.

The Medicines and Healthcare products Regulatory Agency (MHRA) provided information in early November about a novel variant of influenza A virus H1N1pdm09 circulating in the United Kingdom. Mutations in the target gene (MP gene) can impair the diagnostic performance of influenza screening assays, producing false-negative test results. A recent publication from Denmark (Jørgensen et al. 2022) reported other influenza A H3N2 variants that can also negatively affect the diagnostic performance of test systems due to mutations in the MP gene.

The RIDA®GENE test systems used for the detection of influenza (Art. No. PG0505, PG0545, PG6825) detect influenza A via a specific region of the MP gene. Sequence alignments of the detection system used by R-Biopharm to the described sequences of the novel virus variants showed no mismatches. Their reliable detection is not affected by the described mutations. 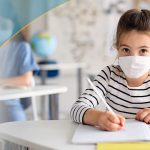 Back to school in the time of the coronavirus – what can we expect?Respiratory infections, Virology