Also called the flu, influenza is one of the most significant infectious respiratory diseases, and it is caused by influenza viruses.
Worldwide three to five million people contract influenza every year, and approximately 290,000 to 650,000 people die from the illness. The annual influenza epidemics can have major impacts on the health care system and the economy.
In the 2018/19 season, estimates put the number of influenza-related doctor’s visits in Germany at about 3.8 million. The number of influenza-related hospitalizations from primary care practices was estimated at 18,000 cases.
The Working Group on Influenza (AGI) of the Robert Koch Institute estimates there are between one and seven million influenza-related doctor’s visits each year. During a severe wave of the flu, like in the 2012/2013 season, there were an estimated 30,000 influenza-related hospitalizations and 20,000 deaths. In contrast, mild seasons (like 2013/14) see only an estimated 3,000 hospitalizations, and influenza-associated excess mortality is not detected.
Influenza viruses are RNA viruses belonging to the family Orthomyxoviridae and are divided into subtypes A, B, and C. Characteristic for influenza viruses is their high variability of the surface antigens hemagglutinin (HA) and neuraminidase (NA) due to mutations (antigenic drift). The influenza types A and B cause the annual flu epidemics, while infections with influenza C viruses cause only mild illness.
Epidemiologically, influenza A viruses are the most important due to their diversity: They were responsible for three pandemics in the 20th century, as well as the majority of flu epidemics. The majority of influenza A infections in humans are caused by the subtypes H1N1 and H3N2. In addition to the antigenic drift resulting from mutation, the mixing of a human and nonhuman influenza A strain can create new influenza A subtypes (antigenic shift), which can trigger a pandemic. The influenza A subtype H1N1 is associated with past and potentially new flu pandemics (e.g., the Spanish flu in 1918/19 and the swine flu in 2009). Today this influenza A subtype is called H1N1v. Influenza viruses are transmitted by droplets and aerosols. The incubation period is one to four days. Clinical symptoms are severe, mainly respiratory tract illnesses accompanied by cough and high fever. A sudden onset of symptoms is characteristic. In serious disease courses, pneumonias and bacterial superinfections can occur, which can be fatal especially to the elderly and children.
Respiratory syncytial viruses (RSV) belong to the family Pneumoviridae and are enveloped, single-stranded RNA (ssRNA) viruses. Two groups of RSV circulate: A and B, whereas RSV A is predominant in most years.
RSV is a widespread global pathogen and can cause upper and lower respiratory tract diseases at any age of life. In infants, particularly premature babies, and toddlers, RSV is one of the most important pathogens of respiratory tract infections.5 RSV is transmitted by contact or droplet infection and manifests with symptoms such as rhinitis, cold, cough, acute bronchitis, and even middle ear infection. An acute course can occur if a bacterial superinfection is present.6 Toddlers and infants often have a serious case that requires hospitalization. Symptoms include fever, nasal congestion, and tachypnea. Estimates put the incidence of RSV infections worldwide at 48.5 cases and 5.6 serious cases in every 1,000 children in the first year of life. While 50 to 70% of infants and toddlers have an RSV infection in their first year of life, almost 100% have had one after the second year of life. 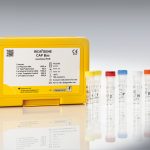 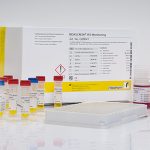