For in vitro diagnostic use. RIDA®GENE Bordetella is a real-time multiplex PCR for the direct, qualitative detection and differentiation of the Bordetella pertussis, Bordetella parapertussis and Bordetella holmesii from human nasopharyngeal swabs and washes.

The RIDA®GENE Bordetella real-time multiplex PCR is  intended for use as an aid in diagnosis of whooping cough caused by Bordetella pertussis, Bordetella parapertussis and Bordetella holmesii, respectively.

Bordetella pertussis is a gram-negative bacteria that cause an acute respiratory infection called pertussis or whooping cough. Bordetella holmesii, Bordetella parapertussis and Bordetella bronchiseptica cause less common a whooping  cough–like illness that is in general milder. Pertussis can cause a serious illness in people of all age groups, which can be life-threatening particular in infants. The WHO (World Health Organization) estimates about 16 million cases of pertussis worldwide in 2008, resulting in about 195,000 children deaths from the disease. In 2012, 41,800 cases of pertussis were reported in the U.S. It is estimated that 3-35 % of the Bordetella infections are caused by B. parapertussis. B. parapertussis was identified during a 3 year study in 14% of the samples as cause of pertussis illness in the US. In a French study B. holmesii was detected in about 20 % of the Bordetella infections in adolescents and adults.
In populations with high vaccination coverage of infants and children the transmission of pertussis still occurs, because protection from vaccination lasts for 5-10 years and protection after natural infection wanes after 10 to 15 years. Thus, in highly vaccinated populations transmission of the disease occurs from adolescent and adults to infants or among people with no more vaccination protection. A recent study suggests lack of cross-protection against B. holmesii after pertussis vaccination.
Real-time PCR allows a rapid, sensitive and specific detection in the first 4 weeks after cough onset. In addition real-time PCR allows the differentiation of the pathogenic Bordetella species. 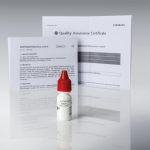 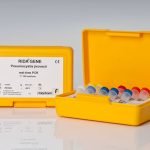