For in vitro diagnostic use. The RIDA®UNITY Viral Stool Panel II test, performed on the RIDA®UNITY platform, is a multiplex real-time RT-PCR for the direct qualitative detection and differentiation of rotavirus RNA, astrovirus RNA, and adenovirus 40/41 DNA in untreated stool samples from persons with signs and symptoms of acute gastroenteritis.
The RIDA®UNITY Viral Stool Panel II test is intended to support the differential diagnosis of viral infections (rotavirus, adenovirus 40/41, and astrovirus) in patients with symptoms of gastroenteritis in connection with other clinical and laboratory findings.
Negative results do not rule out infection with rotavirus, adenovirus 40/41 or astrovirus, and should not be used as the sole basis for diagnosis.
The product is intended for professional use.

Diarrheal diseases are a significant health problem and cause approximately 1.7 billion cases per year in children worldwide. According to the World Health Organization (WHO), these diseases are the second leading cause of death with approximately 525,000 deaths per year in children under 5 years, especially in developing countries. Rotaviruses, adenoviruses, and astroviruses number among the causes of diarrheal disease.
Rotaviruses are one of the leading causes of severe gastroenteritis, especially among children under 5 years. Even though a rotavirus vaccine is available, rotaviruses still cause more than 200,000 deaths a year worldwide. Rotaviruses are nonenveloped, double-stranded RNA viruses with complex architecture consisting of three concentric capsids, and belong to the family Reoviridae. Rotaviruses are divided into a total of 10 different species (A-J) based on the sequence and antigen differences of viral protein 6 (VP6). Rotavirus A has proven to be the most common group responsible for severe acute gastroenteritis in toddlers. Rotaviruses are transmitted primarily via the fecal-oral route, but can also be transmitted through contaminated hands and less frequently through food and water. Typical symptoms of rotavirus infections are diarrhea and vomiting, which usually result in dehydration. These symptoms can result in hospitalizations and, if not treated, in death.
Adenoviruses are non-enveloped, icosahedral, double-stranded DNA (dsDNA) viruses and belong to the family Adenoviridae. Currently, more than 84 genotypes, including all previously characterized the serotypes, have been identified and categorized into seven different species (A-G). In particular, species A to F circulate worldwide and can cause periodic outbreaks of infections. Adenoviruses A, F and G cause infections of the gastrointestinal tract. Serotypes 40 and 41 of species F are most widespread and are clearly associated with diarrhea in children. The skin transmission path of adenoviruses is through indirect contact with surfaces.
Astroviruses are one of the primary causes of acute gastroenteritis with a high burden of disease among children, older persons and the immunosuppressed. They are small, single-strand RNA (ssRNA) viruses that belong to the Astroviridae family. Eight different genotypes have currently been identified, and infections caused by astrovirus 1 are the most widespread worldwide. The symptoms of an astrovirus infection last around 2 to 4 days and are characterized by watery diarrhea, headaches, stomach aches, loss of appetite, and infrequently fever. In healthy children and adults, such infections are frequently free of symptoms, although infections in immunosuppressed individuals are clinically relevant. 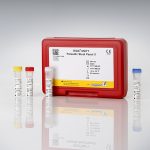