Helicobacter pylori (H. pylori) is a gram-negative, spiral shaped, human pathogenic bacterium which has been found in the stomachs of humans in all parts of the world. In developing countries, 70 to 90 % of the population carries H. pylori mostly already acquired before the age of 10 years. In developed countries the prevalence of infection ranges from 25 to 50 %. H. pylori infections are transmitted via the oral-oral, the faecal-oral route or iatrogenic. An animal reservoir for H. pylori aside from the human stomach has not been confirmed so far.

H. pylori is characterized by a strong urease activity and some strains (type I) additionally produce toxins like VacA (vacuolating toxin) and CagA (cytotoxin-associated antigen A). Further studies have identified HcpC (Helicobacter cysteine-rich protein C) and GroEL (Chaperonin) as new independent virulence factors, whereas GroEL is more important than HcpC. These extracellular products contribute to the pathogenesis by direct damage of the gastric epithelium accompanied by a chronic inflammation with enhanced levels of inflammation mediators like interleukin 8, interleukin 1 or tumor necrosis factor alpha. Patients infected with H. pylori often develop autoantibodies to parietal cells. The key-role of these autoantibodies in the development of atrophic gastritis as precursor of gastric cancer has been reviewed.

Diagnosis is usually based on gastroendoscopy combined with the detection of the pathogen in biopsy material by culture, histology, molecular assays or rapid urease test. Culture from biopsy material is difficult and not always successful. The 13C breath test which is often performed as follow up test, detects CO2 released by the bacterial urease from radioactive labeled urea in patient’s breath. This method is not invasive but the need for special equipment and the uptake of radioactive urea by the patients are disadvantageous.

Immunological tests on the basis of specific anti-H. pylori antibodies (mono- or polyclonal) are available. They enable the direct detection of H. pylori antigens from faecal specimens and may be used for therapeutic surveillance. Serology is the third method commonly used as a non-invasive method to diagnose H. pylori infection and is concerning sensitivity and specificity comparable to other methods. Furthermore, serology is the only test that is not affected by proton pump inhibitor treatment that could lead to false-negative results in other tests. Invasive as well as non-invasive tests for detection of H. pylori infections contain methodological shortcomings. Therefore, the S2k-guideline recommend to include at least two positive test results to ensure a safe diagnosis of an infection with H. pylori.

The SeraSpot® Anti-Helicobacter-6 IgG / SeraSpot® Anti-Helicobacter-6 IgA test is a solid phase immunoassay based on the use of recombinant Helicobacter proteins as capture antigens printed in array arrangement (spot array) on the bottom of the wells of 96-well microtiter plates. The recombinant antigens serve as capture molecules for antibodies against Helicobacter antigens. Bound antibodies are detected by horseradish peroxidase-(HRP)-labeled antibodies against human antibodies of IgG- or IgA-type by substrate reaction with hydrogen peroxide and 3,3’,5,5’-tetramethylbenzidine (TMB). At the site of formed immune complexes blue spots are developed by precipitated product from colorless substrate solution. Color intensity is correlated to the antibody concentration. Pale blue to dark blue spots are visible by eye. 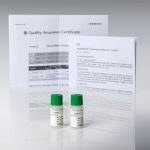 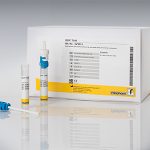